Bradyrhizobium spp. are well-known as nodule endosymbionts in legumes and are also known as endophytes in non-legume plants such as rice plants. It is a very fundamental and interesting question whether the plant-microbe interaction and physiological function are similar in between the endosymbiotic and endophytic life styles of some Bradyrhizobium spp.?

Greetaton et al. (the authors of the research paper article#ME20049) have realized certain morphological and functional similarities such as the enlarged cell size and the increased nitrogen-fixation activity, between the bacteroid endosymbionts in the legume nodules and the endophytic Bradyrhizobium sp. strain SUTN9-2 in the rice tissue. Then, the authors hypothesize that the endophytic Bradyrhizobium sp. strain SUTN9-2 may be subjected to certain interactions of host’s control and symbiont’s responses which are similar to those in the bacteroid endosymbiosis in the legume nodules. The authors have focused on the molecular basis of interactions such as cell enlargement and nitrogen fixation activity, of which possible main genetic elements are defensin-like antimicrobial peptides (DEFs) from rice plant and the BacA transporter protein and nitrogen fixation machinery in the endophytic Bradyrhizobium sp. strain SUTN9-2. To justify the hypothesis, the authors have conducted multiple line of cultivation-based experiments and polyphasic analyses of the cell size, DNA content and nitrogen fixing activity of wild type and genetically manipulated of strain SUTN9-2 during the rice growth and the incubation with rice extract. In addition, the detail transcriptomic analysis and quantification of up-regulated gene transcripts by rice extract were performed.

Finally, the authors found that strain SUTN9-2 shows the cell enlargement, the increased DNA content, and the elevated nitrogen fixation in response to rice extract and the expression of cell cycle and nitrogen fixation genes is affected by rice extract and the deletion of the BacA transporter protein gene (bclA gene). Based on the differentially expressed transcripts in the experiments with rice extracts and using wild type and genetically manipulated of strain SUTN9-2, the authors suggest that the nitrogen fixation by strain SUTN9-2 would be induced by the collective effects of GroESL and oxidoreductases, and the cell differentiation would be induced by the regulation of antimicrobial peptides transporter (sapDF). Indeed, the authors make a justiifiication that the molecular basis of bacterial cell differentiation is similar in between the the endosymbiotic and endophytic life styles of Bradyrhizobium spp. in legume and rice plants, respectively.

The conclusions and interpretations are supported by landslide experiments and analyses and inspected by thorough investigation. This study is quite exciting and provides novel insights into the molecular mechanisms of host-endophyte relationship and deserves to be selected as The Most Valuable Paper (MVP) of The Year 2020 in Microbes and Environments.

Finally, I would like to tag on a postscript.

The MVP of The Year 2019 was given to the research paper (Vol. 34, No. 2, p. 155-160). Mitsutaka Fukudome and Toshiki Uchiumi in Graduate School of Science and Engineering, Kagoshima University, are the authors of both the MVPs of 2019 and 2020! The author who won the prize 2 years in a row was only Yuichi Suwa in 2008 and 2009 in our history since the prize started in 2002. Mitsutaka Fukudome and Toshiki Uchiumi become the 2nd and 3rd persons in the history. In addition, the authors who won the prize twice were ever limited to 4 persons (Yuichi Suwa, Kiwamu Minamisawa, Hiroo Uchiyama and Nobuhiko Nomura). Mitsutaka Fukudome and Toshiki Uchiumi are now the 5th and 6th persons. As my personal view, these authors deserve to be inducted into the M&E Hall of Fame! Honestly, I want to win The MVP of The Year 2021 with a manuscript under preparation now!

Ken Takai, the editor-in-chief of Microbes and Environments 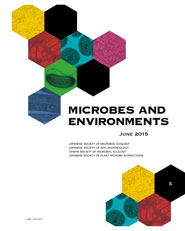